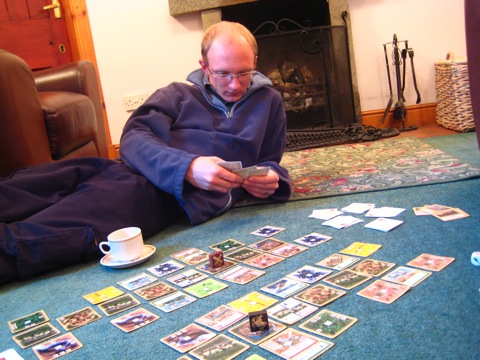 Or so they say.

And hereby, I think I will prove it true, to some degree: 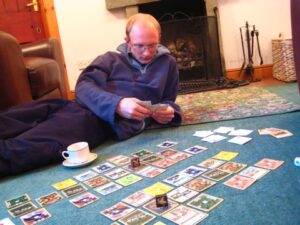 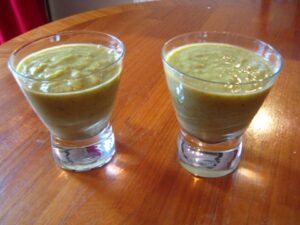 Now for some context.

So we got back from honeymoon two weeks ago – which means we’ve been married now for a month! Incredible.

Honeymoon was amazing – the perfect holiday, I think. We stayed in this gorgeous cottage / gatehouse / lodge , in Gatehouse of fleet: 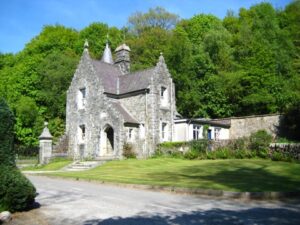 Went for loads of walks (Dumfries & Galloway are lovely!): 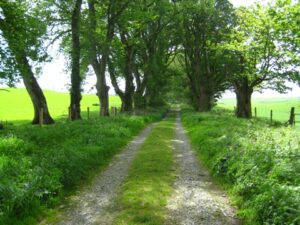 (where I took quite a few photos of flowers and insects, cos it’s cool) 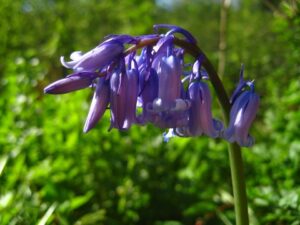 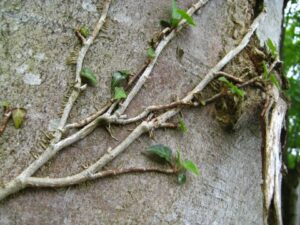 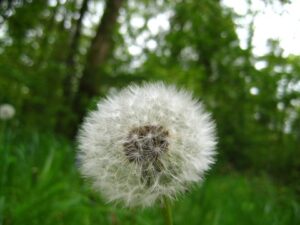 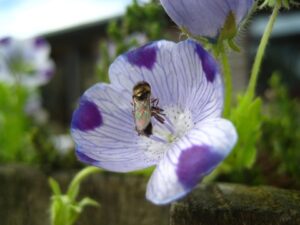 Yeah. Honeymoon was cool! I thoroughly recommend it. Getting married first is a pretty good idea, too.

We visited Cream of Galloway who make icecreams: 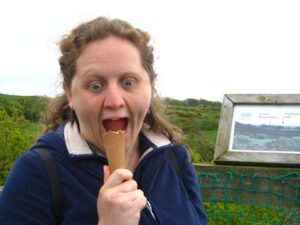 (I love this photo!!! Becky isn’t so keen on it though. heh heh heh) 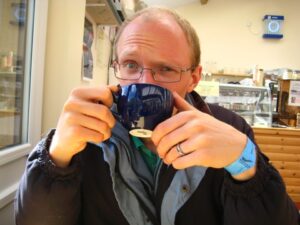 (I figure if I put a funny one of me, I’ll get less flak for putting a crazy one of Becky…) 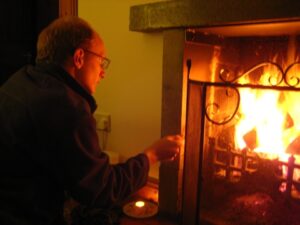 where we made smores: 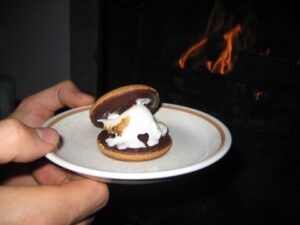 And generally had a wonderful time. Thanks to everyone who came to the wedding, helped us in so many ways, and gave us gifts and all that cool stuff. Getting married is awesome! Being married is even better.

So now we’re back, we’ve been playing with some new kitchen toys (real chef knives, a blender, breadmaker, new plates and bowls and pans and pots and a yoghurt maker… wow! I feel really thankful and very embarrassed in a good way…). Thus the food pictures: 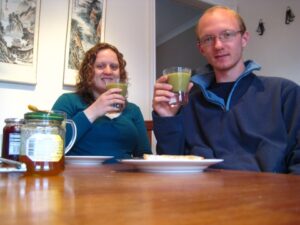 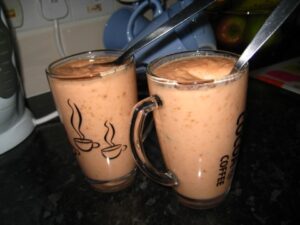 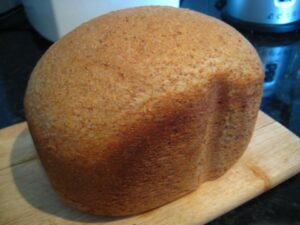 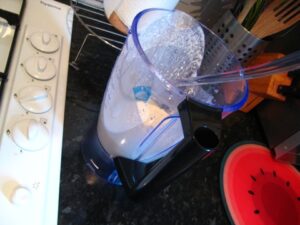 (making pancakes using a blender to make the batter – is this the ultimate in laziness? Whatever – it’s fun! 🙂 ) 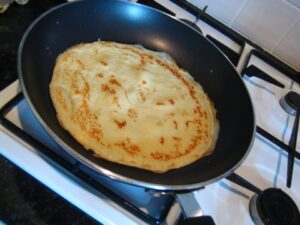 Yes – we’re having fun. Not having to walk half an hour home each night is VERY nice too. I may well post more pictures too, as I slowly sort them out. We haven’t actually got all the pictures back from the wedding, we’ve seen some of them, but I’ll post some of those too, later. 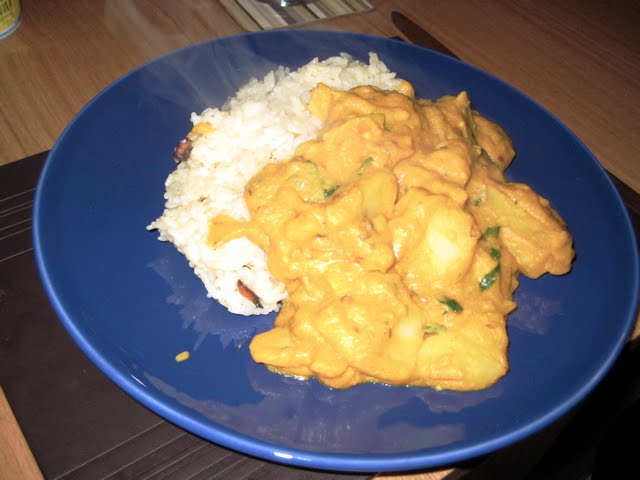 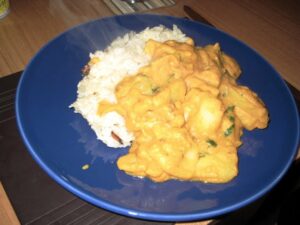 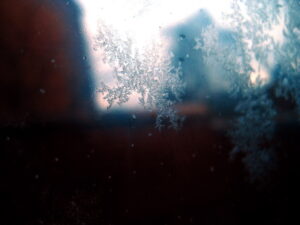 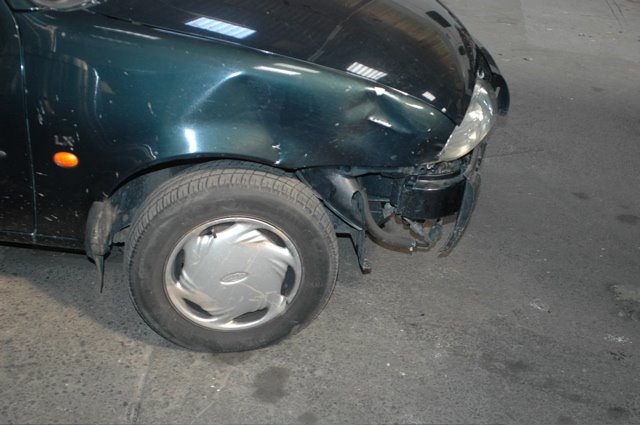 Wind tore across the darkened misty moors of the Lake District, pounding along the side of the tent like a tidal wave breaking upon the highcliffed shoreline of a forgotten arctic land. Outside of the tent, tiny rabbits huddled together in their burrows shivering due to the icy drafts, while inside and close by rain-drenched men struggled through the mud to complete their epic task.

Less then 3 hours previously 6000 people had been standing while the melodious hymn of Amazing Grace washed around them, many, even 200 of them touched to the heart made their way forward to pray and be prayed for, to receive the greatest gift in the history of the world.

3 hours later, the knowledge of this gift was the warmth that glowed inside the men labouring to bring their flight cases, amplifiers and speakers into a truck and depart from the now empty canvas cathedral.

Finally the dismissal was given, and as the last few items were loaded in the the crew slowly dispersed. The 4 OMNIvision men removed their mud covered shoes, and climbed into their small car, and drove out through the dark unlit pathway to the main road, and off into the night.

Soaking wet, muddy and weary in mind and body, their spirits were none the less high as they left the town and none of them were expecting the sudden sliding skid towards the roundabout and the ominous crunch into the other car which told them the journey home would be longer than they had anticipated.

The driver — a Scot — immediately turned their car towards the side of the road and drove up onto the curve to inspect the damage. They climbed from the vehicle shocked but glad that none had been injured. The other car was significantly dented, but the driver was unhurt. After the routine exchange of sarcasm, licence and telephone numbers and insurance policy contact details, the other driver perked up and laughed. Quoth he “At least it wasn’t my car, it’s a company one, I’d have been really pissed off if it were mine!”, whereupon he grinned, hopped in to his, or rather his company’s car and drove away.

The four traveling companions were not so fortunate in their predicament. The bumper was only attached by one nut and dragging along the ground. Inside, the plastic wheel frame was twisted into the wheel, and the headlights were no longer attached and pointing in various directions. With still more than 100 miles of motorway to cover before reaching their destination, it was decided that to attempt to complete it in that mangled condition would be folly.

A phone call for help from the Automobile Association was made, and they settled back to wait for the assistance to arrive.

It was not long until it arrived, and their disfigured ride was lifted on to the tow. The driver, a friendly Newcastle man was quick and efficient, and as he climbed into the cab a few minutes later, he turned and said “No hado sinye fine sell bacun ahl droye temsix unwil mitwethe rileh tuhye hom. Shubetheh intwenni mints.”

Our Scottish companion seemingly spoke this language and so replied, sitting in the passenger seat next to the driver, they passed the time chatting about the evening.

The two Germans turned to the fourth member of their party, a native of the land, although one who had spent most of his life abroad, and asked for interpretation. His eyes were as confused and uncomprehending as theirs, and much merriment was made by the continentals for his lack of understanding.

After about half an hour, they reached a certain motorway service station and they stopped there and moved the car across to a longer distance relay truck, and after buying coffee, bade farewell to the first driver, and climbed into the new cab and made acquaintance of the second.

The next 2 and a half hours passed fairly quickly, and they arrived at Carlisle before dawn had touched the skies with her pink streaked palette. The derelict car was left inside the shed, and the four weary travelers collected their belongings and went their separate ways.

I myself am one of these bold companions, and survived this ordeal with the a moral which I will now pass on to you: If you must drive around at midnight on wet and slippy roads in cars which have seen better days after yourself having worked for about 15 hours hauling heavy cases all over the place and are tired as anything, then drive slowly. Especially when approaching roundabouts. 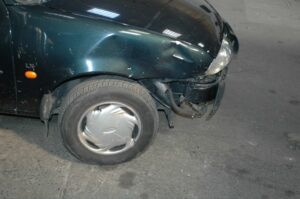 In case you hadn’t guessed, the above is from when I was in Carlisle, I wrote it as an email, but was informed that it needed to be posted as a blog article. So. Now it is. 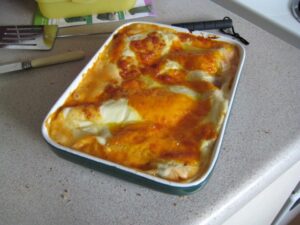 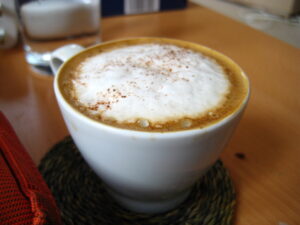 So, it’s currently a voyage on the way to Sydney, we just finished our first port in Australia, Brisbane, hanging out in AV, blogging and emailing and listening to Flanders and Swann.

More up to date blog posts to follow, of course.