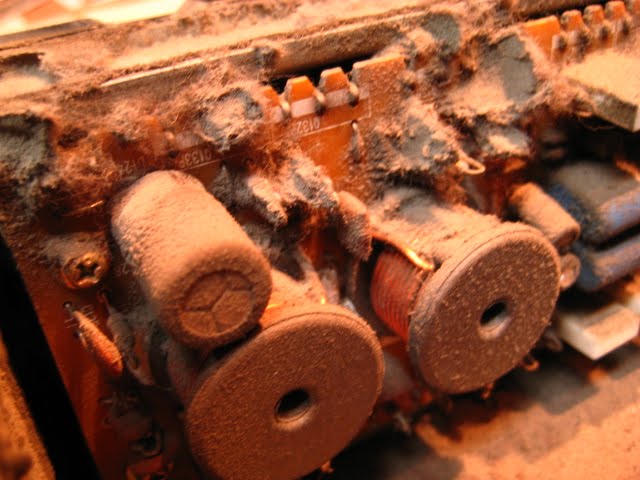 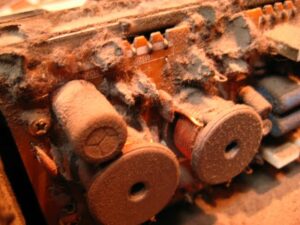 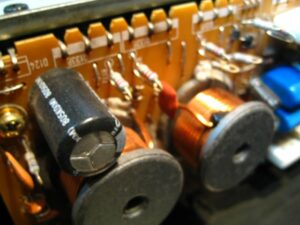 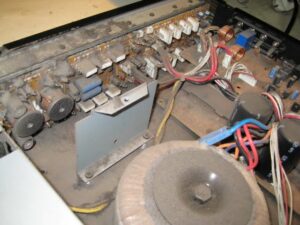 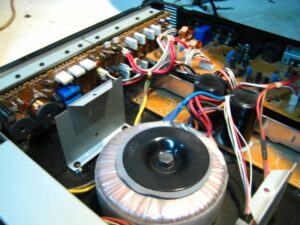 With nowt but vacuum cleaner and soft paintbrush (of course not stolen from Liezel, who’s doing much more interesting things this dry-dock), this has got to be one of the most satisfying and easy jobs on the ship. 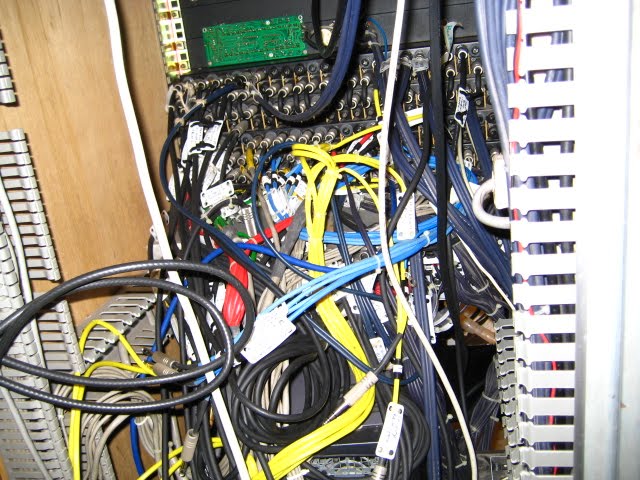 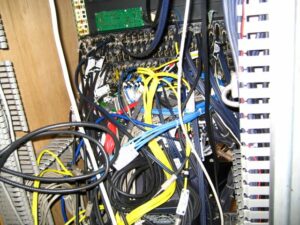 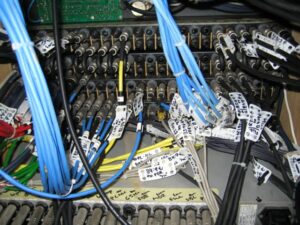 I think it looks a little better. Still messy, but at least understandable. Pretty much everything is plugged in now, and from preliminary tests, we appear to have somewhat better clarity in EVERYTHING, and some of the video signals are visibly higher signal-to-noise with much less interference.
We bought two new audio patch panels too, Behringer ones. Strangely, Behringer also seem to do unbalanced patch panels. Fortunately, the shop had both, and I noticed. What on earth would anyone want unbalanced patch panels for?! 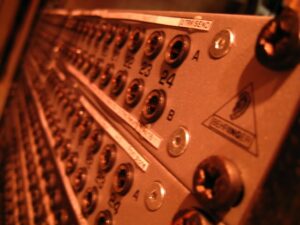 I also had to butcher the two panels which we were replacing to get enough parts to fix a third panel which was very glitchy. Here are some of the internals which are slightly broken. 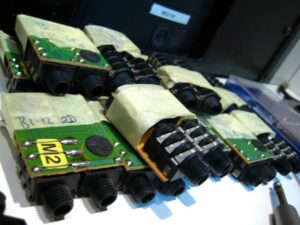 You can see a bit of corrosion on the top contact – even with jackplug cleaners and everything, the equipment is just plain old. 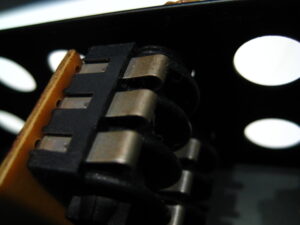 Today, hopefully, I can do the full system tests (need to borrow a oscilliscope and reference signal generators…), and then get the whole thing boxed up and leave it until the end of drydock. Then I can work on more fun projects. Videos, song composition, etc.
That’s all for now, I’ll post more shorter posts later, with more pictures. 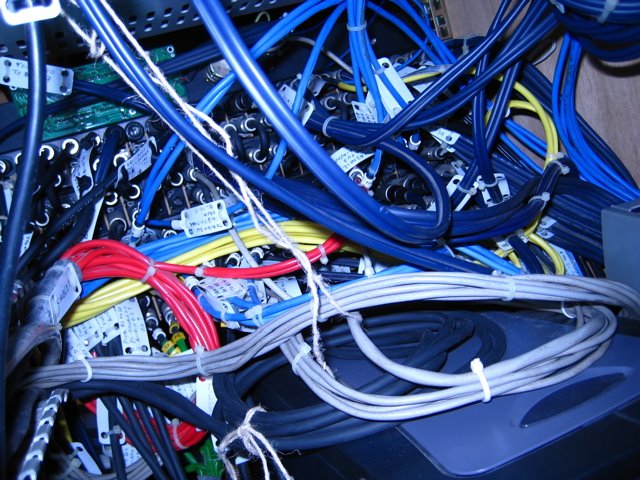 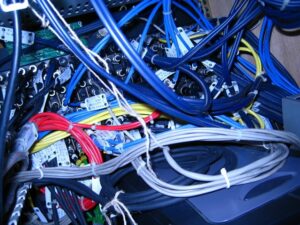 The sweat drips from my nose, and splashes, sizzling, onto the soldering iron.

It’s roasting hot, and the cables are all around me, as squashed into a small space behind the audio rack I put the finishing touches to the new audio lines I just ran across from the desk opposite.

It’s dry-dock again.My third, now, and this time, I’m just not enjoying it.

I have quite a lot on my plate at the moment, what with trying to sort out many technical issues in the A/V equipment, and also get as much as possible done to allow us to expand and use what we have better throughout this coming year. 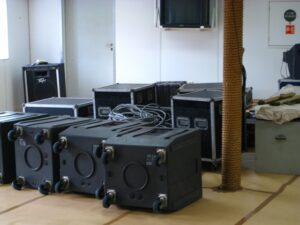 Also, the other members of the A/V team are busy with other projects, and I’m helping out a bit again with the deck ladder-repair and making crew. 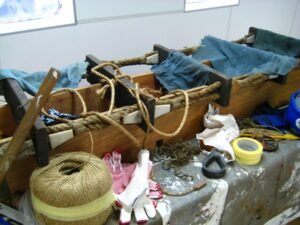 That’s the sound that the lights make when blackouts happen.

We just had another powercut.

That’s the sound that the fanrooms make when the power comes back on again.

The power just came back on again, by the way.

Yeah, there’s another fairly huge but unofficial project on which has pretty much sucked all the free time out of one of my team for the last 10 months – even from well before he joined AV – and also has been increasingly impinging upon the time of the rest of us.

They created an(other) unrealistic deadline to finish it before the end of this drydock, and I knew he would push all his time and energy into it.

So I pretty much gave him his work time to get this thing finished.

Which is good, I guess.

I mean, he’s not dead, which if we’d pushed hard at the AV jobs as well, I think he would be.

He just wouldn’t have slept at all.

We barely did anyway.

I was up until 3 one night working on an animation for the project. 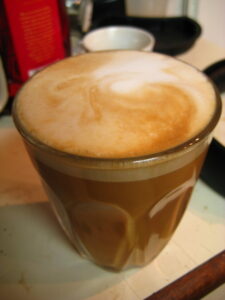 Many of the AV tasks I had (I wrote down 58 jobs I’d have liked to either do, or investigate the feasibility of) have not been done, and most of them I didn’t even get a chance to investigate how possible they were.

The first version is done now, which is good.

Still plenty of logistics and miscommunication issues to sort out.

I’ve been making sure I keep time for myself, not burning out, and part of that includes focussing more on painting and artwork.. we’ve begun “creative communities” on board – basically an internal art/photography/creative writing club, with picking a theme per month.

The theme last month was “Freedom”.

Here’s a painting of mine – “Searching for Love” 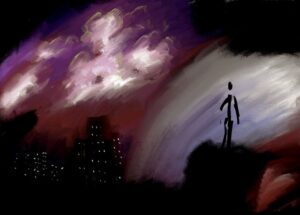 I helped out a bit with the ladderwork again this drydock.

Pretty much the same as last year.. this time we stretched the rope slightly more thoroughly.. Check out before and after stretching: 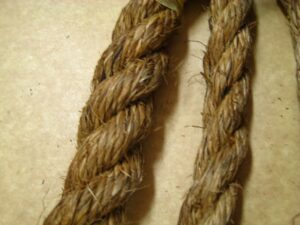 I feel somewhat drawn out and stretched myself. 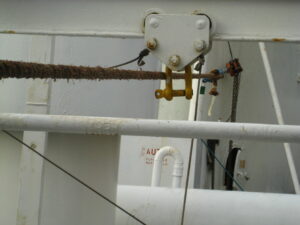 I don’t think I’ll snap.. but hopefully I’ll be all the more resilient to whatever life throws at me in the future because of it.

And my current work in progress. 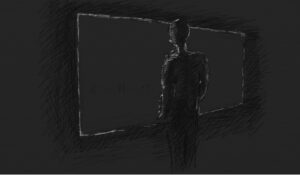