So this is Part 3 of my seminar / workshop on Story Telling that I did with the Logos Hope On-Board events Team. Here’s Part 1, and Part 2.

There’s an interesting alternative theory called, “The Hero’s Journey” (or “Monomyth”). There’s books written about this, some really cool ideas.  A very approachable version is by Dan Harmon, the creator of Community.  Ant Webb was the guy who introduced me to both Community, and the Hero’s Journey.  We’ve been discussing it and used it as part of Matt’s Blog. 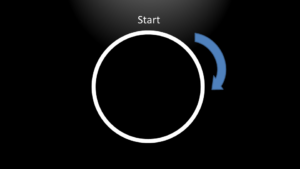 The Hero’s Journey theory says good stories are circular. You end up back where you started. They’re a journey from home, from comfort, from the concious, down into the subconscious, uncomfortable far away place, and back eventually home again. Of course, changes happen along the way. 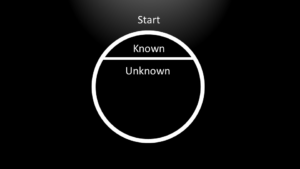 The full theory has all kinds of Freudian stuff to do with being forced out of the mothers arms by the call of the father, eventually defeating the father, and returning eventually as a mother or father all that… (Seriously, Freud had issues.) Also, there’s loads of details that are reasonably important, and do make the story more compelling, but also, with much added complexity. 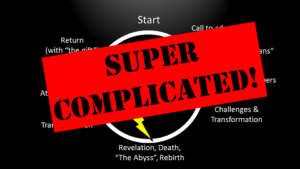 So lets go look at Dan Harmon’s Story Circle instead. 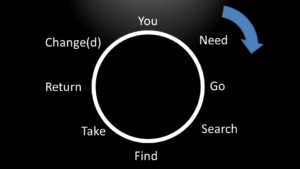 He takes the circle concept, and breaks it into 8 simple parts. 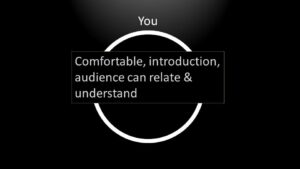 We start off at “You“. This is where “you” the audience relate to the main character(s). Preferably, the character should be in a place of comfort, or at least, be connected to some kind of easy-to-relate-to “home” situation. This could be a sailor at sea on the bridge, or a little bear playing a balancing game, or Garion at Faldor’s farm, a new student enrolling at community college, etc. It’s a starting point that the audience can relate to, and feel comfortable understanding. They don’t have to dig deep emotionally to connect with the main character. It happens automatically. This is the concious, mental understanding area. 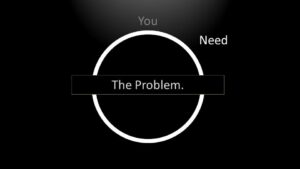 Next is the “need“. Something isn’t right, or some how the stable situation will be pushed off-balance. This is pretty close to the “problem” concept from the 3-act play model. Note, we’re still basically in the stable conciousness. 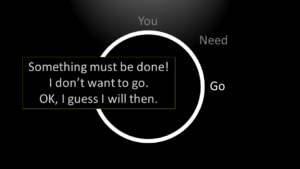 So, since there’s a need, I guess we’d better “Go” do something about it. This is where the Hero decides to actually leave their safe familiar environment, and go out into the world to solve the problem. We finally dep 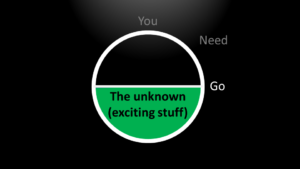 art the concious, and head into the scary subconscious / unconscious. The going can often be the most emotional part of the story. Or at least, the most emotionally motivated or driven part. Once the Hero is actually off fighting dragons and saving maidens, they’re too busy actually doing stuff to be all soppy and emotional. 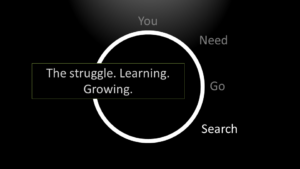 Now that we’ve actually left, comes the big difficult part of the story, the Seeking, or Searching. We may not exactly know what it is we’re looking for yet – but we’ll find out. Many different avenues can be explored, different people met, etc.  This can be long, arduous, and challenging.  The main character should be growing and changing here. 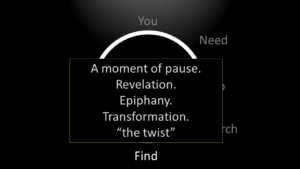 Eventually, we Find what we’re looking for. This is where we can start looking at the more interesting parts of the theory.  Up until now, it’s all been pretty pedestrian, but behold: the magic! 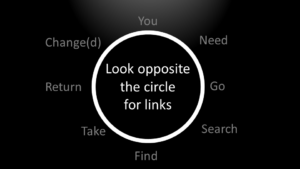 Each point on the circle has an opposite point.  OK, to be honest, that’s more like geometry than magic, but whatever.  They’re kind of similar. 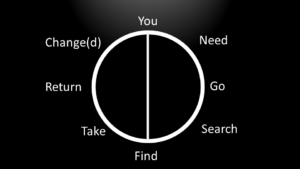 Find is directly opposite on the circle from You, for instance. All opposites have extremely strong ties to each other. So “You“, signifying conscious comfort and familiarity, can either be used here with direct parallels, or with polar opposites. But either way, it’s linked. Garion is tempted most by Torak by images of family and a safe life with Aunt Pol. Little Bear realises it’s dark and thinks about going home. Frodo and Sam reminisce about home, talking about planting the acorn from Loth Lorian in the Shire, deciding it’s all worth it to stop Sauron’s Hoards pillaging and burning everything they hold dear. 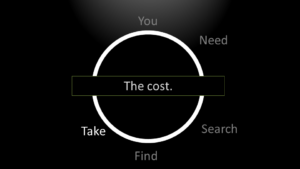 So we’ve found it – but to actually Take it, there’s a Cost. As Rumplestiltskin so repeatedly says in Once upon a time, “Magic always comes at a price!”. Here, again, is a link across to “Need“, the opposite number again. 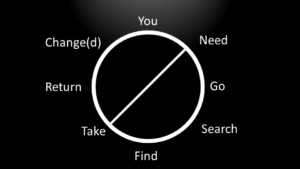 If the need doesn’t balance the cost, then why would you pay it? Too high a cost, with too little benefit, and the audience feels like the hero is crazy, or just doing it because the script says to. Too small a price, and the audience feels cheated. It’s too easy.  So again, making links between the two helps strengthen the story.

Note: Often the Find and Take are very close together, the 8 points on the circle don’t need to each have equal screen-time. 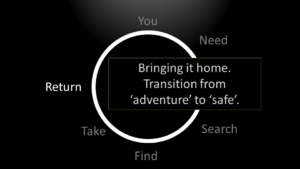 Having paid the price and Taken it, now we need to Return home. This is where we can start to bring home the conscious message of what we’ve taken. It’s the balance point going back into the safe lands again, and can be quite emotional again. 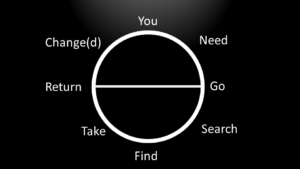 There’s nothing really left to do, so it’s beginning to relax time, which means all the stress of the journey can begin to surface and be dealt with. 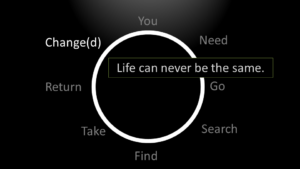 As the Hero returns home, presumably, hopefully, they’re somewhat Changed. If the hero hasn’t actually changed, then really, what was the point of the whole thing? This is where sit-coms and soap operas cheat like mad. Since they don’t actually want to seriously change the situation, but leave it ready for next week, they have to paint lots of obvious messages about what the characters have learned, even to the point of having characters sitting around saying trite crap about, “I guess now we know that…”, “So next time I won’t do that again…”, so that the audience feels like they’ve seen a change, although actually, next week, they’ll all act exactly the same as before. (Sad, isn’t it?) 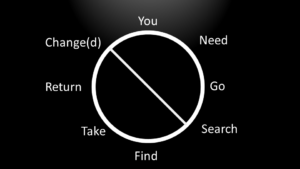 The Link with Changed is Search.  It’s usually through the questing / searching / learning part of the story that the Hero has changed.  This is done extremely obviously in Lord of the Rings (the books, of course) when the 4 hobbits return to the Shire and kick out Saruman and Wormtongue.  The LOTR movies don’t have that section, so they try to show that they’re “changed” through a soppy emotional “Oh Gosh How Deep We All Are Now” load of rubbish with the 4 hobbits making calves eyes at each other.  They do show Samwise actually going to ask his sweetheart to marry him, finally, which is good.  But still.  There is actually a reason for the section they cut out.  And the  movies suffer for lack of it. 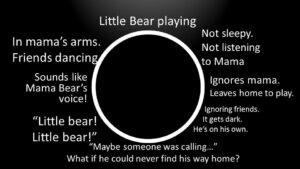 And so that’s the basic overview version of The Hero’s Journey.

And that concludes my mini-series from the workshop.  In some ways, I wish I could have just told the Events Team “Go Read Dan Harmon’s Blog Posts, and watch Glove and Boots!”, but the ship’s firewall blocks half of it for profanity, and it would shock the heck out of the team for actually containing said profanity, and doing a workshop is actually a lot more meaningful to many people than simply reading it on a blog.  But since you, dear reader, have read my blog, here’s a link to the stuff Dan Harmon wrote about it. It’s also in several parts.  And probably quite a lot clearer than what I wrote.  My audience was a bit different, and I was simplifying in different ways because of the direction I’m trying to influence them.  Read what he wrote.  There’s good stuff there.

Glove and Boots also did a video about The Hero’s Journey, which covers the more character-centred side of the theory:

Anyway, I should stop waffling now.  I’m writing a lot of this while sitting on a cold floor in Changi Airport in Singapore with my wife and 1-year-old son sleeping next to me at 5:30am.  I think I’ll wait until I get home to proof read it once more before publishing…