This is the second part of a 3 part series, transcribing / “article-ifying” a training seminar I ran with the on-board events team on the Logos Hope.  Here’s a link to the first part.

Aristotle and a suuuper simple model

Waaay back in 350 or so BC, a clever Greek dude (Aristotle) said that he reckoned a good story (or theatrical performance) had 3 parts to it:

In some ways, the most important thing from this is that without a problem, there is no story. There has to be “something rotten in the state of Denmark”. Or else what keeps your audience more interested in the programme, than in what’s on their phones?

Taking this concept a bit further, is the traditional “3 act play”. Often our events aren’t done in acts, but the concepts are useful for thinking, “Where should I put the refreshment breaks?” and thinking how the story energy levels should map out best.  Whether or not you actually use this model, it’s still an interesting one to look at, and see if it helps you.

The 3 acts are pretty close to the “beginning, middle, end” concepts from before, but expanded.

Confusingly, sometime the 3-act-play can be broken down in to 4 parts:

which progresses through the main character (and audiences’) perception of ‘The Problem’.

There’s “potential” for an interesting story – you set up the main character(s), and the problem.  But they’re not actually in conflict yet (at least, as far as this specific narrative goes.)  There’s resistance to the conflict – things get in the way, the problem isn’t fully understood yet, etc.  Finally the conflict itself, actually doing something, rather than just trying to understand the problem, and finally the outcome, and cleaning up.

I mentioned that the Main Character and the Problem may not be in actual conflict yet.  Just to note here, this is for the purposes of this narrative.  For instance, in David and Goliath, Israel and Phillistia are at war at the beginning of the story.  However, the Main Character, David, isn’t actually in personal conflict with Goliath, until much later. 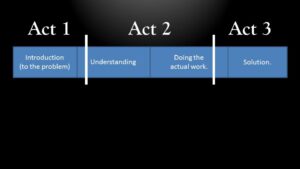 Starting off the play, you need some kind of event which introduces the reason for the story.

The children of Israel are at war with the Philistines. Jeff Winger starts at his new Community College; Darth Vader boards Princess Leia’s diplomatic space ship and takes her prisoner; The orb of Aldur is stolen; Little Bear is playing, and it’s getting late. 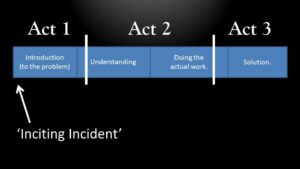 Sometimes, this is called the ‘inciting incident’.

One thing to note is that this might not involve the main character. It’s setting the scene for the whole rest of the story, and may in fact be the cause for many different stories to happen. A murder has happened, but at least so far, the main character may not yet have been put on the case.

As “The Problem” now develops, at some point it’s going to bump into the main character, and eventually, somehow, they’re going to have to do something about it. They may not be keen on the idea, they may need to be persuaded, or dragged kicking and screaming into it, and often it’s more fun if that’s the case. 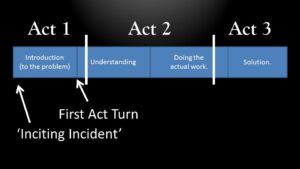 This point, which causes the main character(s) to actively attack the problem, is sometimes called the ‘First Act Turn’.  David visits his brothers on the battlefield, and sees Goliath challenging them all, and no-one having the guts to do anything about it.  Luke Skywalker’s Uncle and Aunt are killed and he decides to go with Obi Wan; Mr Wolf and Aunt Pol tell Garion that they’re going to leave Faldor’s farm; Little Bear decides to ignore Mama bear, and play instead.

Now you’ve actually got the audience hooked to the story – they’re interested in the character, and now the character is about to go do something interesting. This is a good ending point for the first act, so you might as well try and sell some refreshments, as you know the audience will come back to find out what will happen.

Curtain up again, time for Act 2. It’s been joked about that you should just skip Acts I and III and just go with II, as that’s where all the interesting stuff happens.

In the four stages listed above, you can see act 2 divided in half.  The first half is typically about understanding the problem, the second half about actually going to do it.

So first, we learn more about the problem. Often there’s a lot of discovery, trying to understand the problem first, and then later transition into actually doing something about it.  David starts asking his brothers about Goliath, and they despise him. The Prodigal Son is burning his inheritance, not realising the consequences.

Sometimes, around about the mid-point, there’s a good point to stop, pause, and say, “Right. Now we know what we need to do, lets do it!” 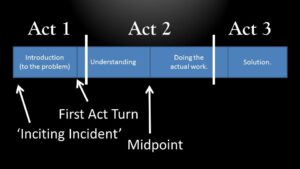 The mid-point can be the major turning point in the story.  David’s questioning about Goliath finally reaches the ears of King Saul, and he calls David before him.  The Prodigal son’s money finally starts to run out.

Now we’ve finally got to a place where the Main Character will come into actual conflict with the problem.  David tells the King that he’ll go fight Goliath.

However, often the “doing” is more complex than originally thought, and it can all go terribly wrong.

The King tries to give David his armour, but it’s far to big, and David falls on his face.  The Prodigal Son thinks he can still be self-sufficient, but his “friends” reject him, and goes on the hunt for jobs.  Eventually he finds he has no skills at all, and ends up feeding pigs.

Obi-wan dies fighting Darth Vader; Garion decides to leave his friends, his Aunt, his safety, and go to fight Torak himself; Little bear realises it’s dark and he’s all alone, and he doesn’t know the way back home. 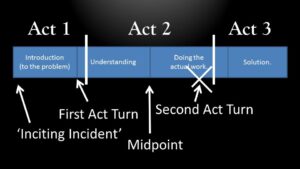 This sudden swing – it looks like the hero will be defeated, or the current route is blocked is a really good way to bring the audience up short. Things might have been challenging before, but at least it was going somewhere. Now what’s going to happen? This is the “Second Act Turn”. Again, roll out the popcorn and drinks; art doesn’t pay for itself, you know. 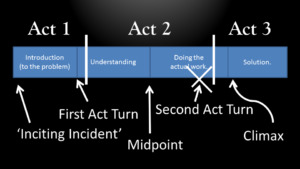 OK, you may not always want the audience to feel good at the end. Sometimes a tragedy is more moving, and you know what, frequently life sucks. But you want them to feel satisfied that they got their money’s worth, and that it’s probably worth coming again.

There are other subtleties you can add to this basic overview, such as adding “The Question” as a (sometimes hidden) subtopic to The Problem. The Question can be something more personal, or more meaningful than just solving The Problem, and it’s only through The Problem that the main character can understand The Question.

So, that’s the “3 act” model of telling a story (at least, a version of it).  In some ways, quite complex, but it explains pretty well how the energy-concepts from Part 1 can map onto a longer story. 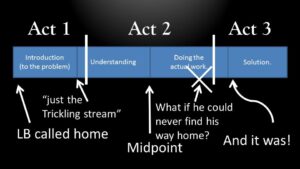 Next time, I’ll go into the “Hero’s Journey” model.