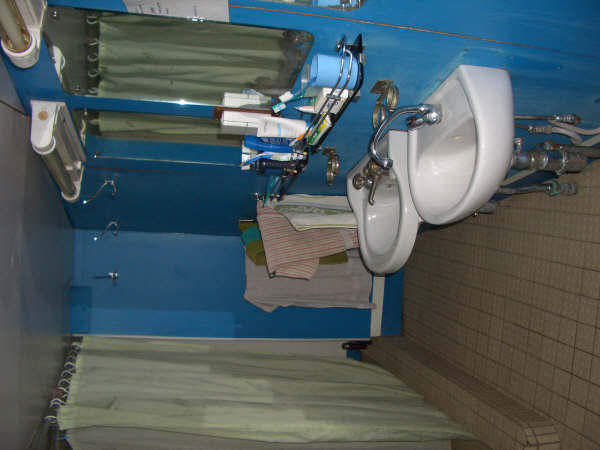 Man, I really have abandoned this poor blog, have I not?

I spoke at church, last Sunday. Seemed to go OK. I was quite nervous, but managed to make people laugh a few times, and a lot of people have said how much they liked me talking at church. Thing is, I don’t actually like the whole “Sunday Morning Church” thing. Particually having a 30 to 45 minute “Sermon” or lecture shoved in the middle. I talked for 20 minutes, and feel kind of guilty for taking so long.

I’ve got the OM application form, and thus far have not yet filled it out. I really need to. We’re going back to the UK in about a week, for an entire month. I wonder if they can post the next set of forms to me there? Hm.

One of my friends from the STEP sent me some photos of my cabin! I’ll see if I can put some online over the next few days. Here is a picture of the bathroom of our cabin… 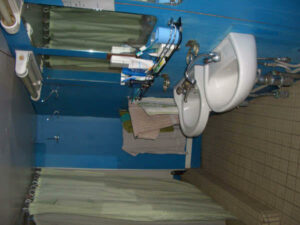 I was going to go on a 5 day woodwind repair course in Wales in about 3 weeks, but 2 days ago I phoned them because they had still not sent me the accomidation details, and they said “Ah, yes, well, you see, the tutor we have hired just told us that he cannot come until a week later. We were just going to phone you later today to tell you…” Well. A week later than the course is the week we come back to Cyprus! So not a whole lot of use! The guy says we will get a full refund, and he is trying to see if he can find a woodwind repairer friend of his to take me on as an apprentice for a week… Who knows.

This is one of those things, you know, when all your plans just jump right out of the window, and there is nothing you can do at all. I just have to trust God again in this. I know that He can change dates and things, like He did with the Doulos when I joined, with them having a place for me in June rather than later in the year. So I know He can do the same now too. Both ways. If He wants me to do this course, He can change the dates back again, and provide the accomidation. And if He does not want me to do the course, again, the same thing. So this could be His way of saying “Not this time, boyo” (He’d say “boyo” because the course is in Wales). So yeah.

On a lighter note, it looks like I will be able to buy my new clarinet in about 2 weeks! Woo! There is a shop in Worthing which is right close to where my Grandmother lives, and we will be visiting her for a while, and will try to visit then to go clarinet shopping. Yeah! I’m currently planning to get a Buffet RC Greenline. We’ll see. I think a greenline would be best for being on the Doulos, with all the crazy humidity and other conditions and all.