This is a 3d representation of the Doulos Toaster: 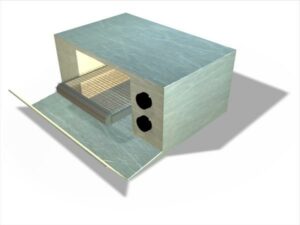 Strange things happen with this machine.

I’ll explain how ought to work:

1) You put your bread on the metal mesh conveyor belt at the front.

2) The conveyor belt slowly slides the bread inside, where a double grill toasts it.

3) The (now) toast reaches the end of the conveyor belt, falls off it, and slides back to the metal toast-catching tray at the front (just below where you put the bread in).

4) You pick up your perfect slice of toast, a happy smile upon your lips, and head towards your table, while others in the dining room cast admiring glances at your beautiful slice of gastronomic delight.

There. That’s how it ought to work. This is what actually happens:

1) You stand in a medium sized queue waiting for your turn at the toaster, while people push past you to put their finished trays onto the rack, napkins in the bin, and so forth.

2) You eventually reach the toaster, and now have to wait while the bread already on the conveyor belt moves forward enough for you to fit yours on.

4) You set the speed back down to the slowest speed again.

5) Someone comes along with their bread, peers at yours sitting on the conveyor belt which is just entering the toaster, and they push your bread forward so that they can fit theirs in.

6) This really annoys you, because it means that YOUR bread won’t get as much toasting as you want!

7) They then set the speed up to the fastest.

8) This annoys you even more.

9) You patiently and with loving brotherly kindness explain that the dial changes the SPEED that the bread goes through the toaster, and NOT how hot the toaster will be, and that they just made their bread get less toasted, which wasn’t what they wanted, was it?

11) Your toast pops out of the toaster.

13) Wait a second, this isn’t your toast! You put in brown bread, from the middle of the loaf, and this is a white crust!

14) You put back the toast into the toast-catching tray, and peer inside the toaster to see where your toast is.

15) There is no toast in the toaster. It is now empty.

16) Puzzled, you pick up the white toasted crust, and wander around for a while holding it, and asking random people if it is theirs.

17) Eventually you give up, and confusion oozing from every pore, head back to your table.

18) You trip over someone who was pushing their chair out, and drop the toast on the floor.

19) Someone treads on it, and appologises.

20) You sigh, say “A little dirt never hurt anyone. Especially on Doulos!”.

21) Everyone in the near vicinity nods sagely.

22) You pick up the crushed white now-cold crust, and continue on your way to the table.

OK. So that’s what actually happens. The question is :

Now, we could either conclude with a rather trite, but possibly true conclusion that it is all part of God teaching you about patience, but my answer is slightly more believable.

The Doulos toasters (referred to now as “a“) are actually a multi-dimensional hyper-space teleportation and transformational location-modification device, which maps your bread ( now “b” ) through a quantum-bread meta-matrix and returns it utilising a state-switching algorithm which aligns the spinless iso-toast (“c“) with a 7 digit hexadecimal Glenn-Mann style vectoral frame reference so that, obviously, the anti-toast (“d“) particles of the sub-heliotropic “b” (also known as “your bread“) are accelerated to a state where by critial mass is reached simultaneously with the point where another semi-random peice of toast is displaced from the meta-matrix, and arrives in the toast-catching tray.

So keep this in mind next time you want some toast on the Doulos.

Even though I hardly understand it – I really love the way your mind works! It’s kind of complicated but kind of not.