Here’s a conundrum for you.

If you’re not interested in video, then this may be boring as anything for you.

OK. Here’s the deal. A conference, and it’s Mandarin. The main speaker is American, and speaks no Mandarin whatsoever. So he has a translator. No problem. Now say you have an audience of 300-ish, and are using live video to show the speaker on TVs around the room so people can see. OK, again, no problem. But, since the speaker and the translator decided to stand far apart, if you show a shot wide enough to get them both, they’re so small on screen that it’s totally pointless putting them on screen. Usually, I believe, it’s normal to just go for a close-up of the speaker. So, then, if you have audience who are all old people and probably somewhat hard of hearing, they’ll want to lip-read the translator at least somewhat. So. What to do? Cutting back and forth between two cameras is too much work, and tiring, and probably more annoying to watch than anything else.

I tried to be a bit clever and “TVish” this time, but I still am not totally pleased with it.
If the speaker and translator decide to move around a lot, remote cameras just will not cut it. 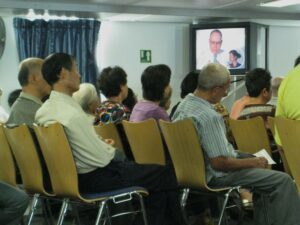 One reply on “TV stuff”

That is no problem at all Daniel. Just go up to the translator. Tell him to get is behind near the speaker and then shoot both of them with one camera.