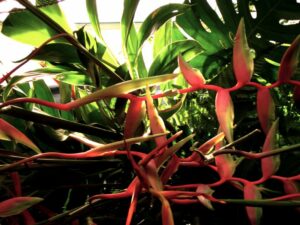 I moved into a new cabin a few months ago, when I changed jobs to AV, I could no longer sleep in my beloved Waterman’s Cabin any more. My new cabin is alright. Not anything really special… Actually, it is quite special. The bathroom and main doors are in exactly the same place, in a tiny corner of the room, making it a health hazard if you happen to try to open one while someone else is opening the other. Speaking of the bathroom, here’s a rather nice photo of the flush valve on the toilet. 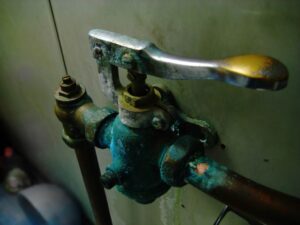 There. Isn’t that special. It leaks a lot, which is why it’s encrusted with green salt-crystal thingies. Doulos toilets are flushed with salt water, by the way. Thus we have a slightly strange feeling (for europeans) system, that you can have only 3 minutes of shower per day (which is fresh water, and expensive), but are expected to flush toilets for a minumum of about 20 seconds, to keep the system well cleaned out. Our toilet blocks a lot, probably partly due to the flush valve, which you’ve just seen. It has this helpful sign above it, which never ceases to amuse me: 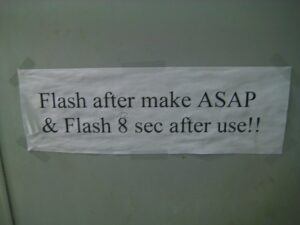 The actual meaning of the author is probably lost in all antiquity, as is his identity, which is probably a good thing. They also left this charming inscription on another note stuck up by the sink: 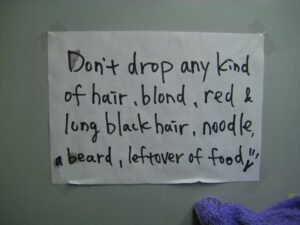 Ahh… the joys of living on a multicultural almost-english speaking ship.

Dear Daniel:
I miss you. Finish drydock quickly so I can come home.