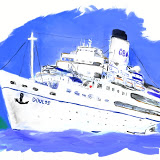 I’ve found that blogger has kindly been putting my photos I upload here to the blog into a “Picasa Web Album.”. Wasn’t that kind of them? So, it’s possible to look at all the pics in one place. Very spiffy.
The link is right here:
It also can do flash slideshows and all sorts. So I’ll be playing with that. I need to update this blog design a bit anyway.  I also will try and write a perl script to make the picasa album appear as the old fliker one does in the sidebar ->.
I don’t have much time left in Cyprus.  We’re going as a family to Egypt this evening, for 4 days, and then after that I leave about 5 days later.  Kind of scary how fast time has flown.
Then it’s off the UK for 2 months, then to Doulos.
Here’s another couple of boat/sailing sketches. The one on the left could be a Wayfarer, but the one on the right is way bigger. 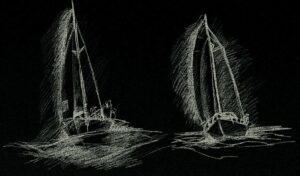 I’ve been trying to make a video about Doulos to show later this week (once I’m back from Egypt) to people, and will probably post some of that later on.
I’m not very happy with Apple right now..  I had to reinstall the computer *again*. That’s like 7 times since I got back from Doulos. Why? Well, many of the times is not Apple’s fault, it’s true.  I did replace the hard-drive, with a bigger one. That was moderately monstrous. They really hide those hard-drives well inside the poor laptops. Virtually impossible to get out.  Anyway, the reason I had to this time was because I upgraded to Leopard, but alas, half my software doesn’t work properly with it.  It’s a much nicer OS than tiger (looks-wise, but also technology like Quick-View, Spaces, and so on.
The version of Garageband that came with my laptop (only 3 years ago) doesn’t work with Leopard. I’m supposed to pay for the upgrade, which I’ve read may not work on this old a mac. This old?! Good grief.
Then Final Cut Express 4 doesn’t capture video properly on Leopard.  It does about 3 mins, and then freezes.
Also Protools doesn’t work (even though I don’t have a copy, we were using it at the office for the show of Esther audio last month, and had to keep a Tiger machine around to use it…).
Anyway.
However, Apple Keynote is a very nice programme. I’ve used it to make some presentations, about Doulos, and now I’m actually working on an animation about the ship.  It’s so basic, for animation. Almost too basic, I think I’m kind of pushing it’s limits, but it works.  Once I’m done, I’ll post the video here.
I really have so little time left, and so many ideas and projects I wish that I’d spent more time in.  Part of me feels really worried that I’ve wasted this time, and not used it as I could.  On the other hand, I have this other either lazy, or else wiser, part of me saying
“There’s *always* good projects about mate, and if you try to do all of them, all the time, you’ll never get any of them done, and, you’ll burn out.  This is the only time you’ll get for just reading and reading and hanging out with your family and cats, so enjoy it.”
Oh well. I need to start cleaning up my desk…