Since we’re only on the ship for a few more days (!), I thought I’d post a few photos. 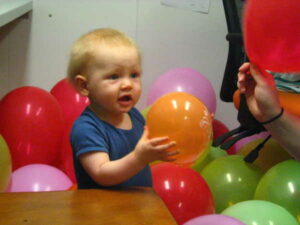 It was a friend’s birthday, and so various people filled his office with balloons.  David already loves coming to visit him (Tommy), and this visit was even more fun. 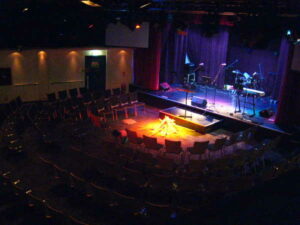 Prayer night on board.  They’d decided for a “gather around the fire” kind of set up, the evening being led by the Africans on board, so I added a few lighting touches to make it feel even more campfireish.

This is the new lighting control system.  We’ve got rid of the old, difficult-to-teach, increasingly flaky Zero88 LeapFrog Desk, and put in place a computer, with a USB->DMX interface.  The software we’re using is free, called “QLC+”.  It’s got a few bugs, but is *incredibly* much more easy to teach people, and allows us to do cool things like play music from the software, with lighting cues at specific times in the music, make the moving-head lights bounce around in time, etc.  Cool cool stuff. 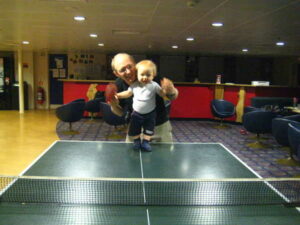 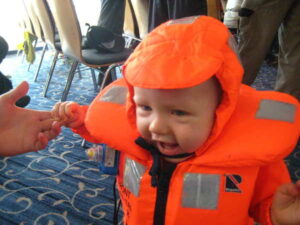 Muster drill today, David got all dressed up in his lifejacket, and looked stunningly cute, in a marine kind of way.  He had fun, anyway. 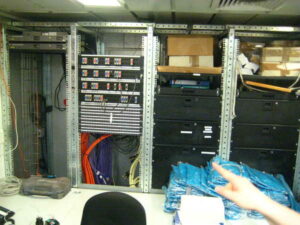 This is a project I’ve wanted to do for a while.  The equipment in this office is “AVC” (Audio-Visual Central), and the main hub for all the AV routing around the ship (sending video & audio to the dining room so people can listen to devotions while finishing breakfast, for instance.  Or displaying big programs in the theatre in the Logos Lounge as well as an over-flow venue, or as a place for ship’s company to watch, etc. etc.).

Anyway,  This whole wall of racking is quite a mess.  This office used to be the IT office, and backs on to the server room.  Things have changed now, and it’s the on-shore-events team who work here, so having 19 inch racking makes no sense.  And they need more storage space, and the IT folks need more storage space too.

So I suggested (about 2 months ago) moving the AV equipment into the far left rack, and then turning the other 3 racks into cupboards facing both ways, with plenty of space for the IT guys in the server room, and plenty for the on-shore teams in this office.  Nothing came of my suggestion, so I thought, “oh well, the carpenters are too busy.  whatever”.  But now they’ve got a couple of enthusiastic project workers on the job, and everyone’s quite excited about how much more space they’re going to get. 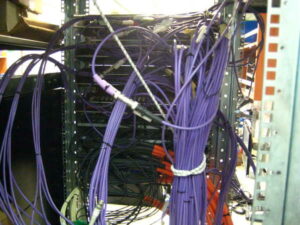 Although I’m wondering if I was mad to suggest this project, as it does mean quite a lot of moving cables and equipment around…. I hope I don’t break anything.  I want to do this while I’m here though still, as none of the A/V team have any experience doing racks/patchpanels/routers/install type stuff.

It seems really odd that we’re going to be leaving in less than a week.  Hard (in some ways) to think we’ve been here 3 months.  In some ways it seems like a lot more, and in some ways it feels like we’ve barely arrived.

One reply on “We interrupt this series…”

Follow up – The rack still looks the same. They’ve still not managed to actually use the rest of the space better.