I’m typing this from the dry food store, miles and miles down in the depthful belly of the ship. I don’t know if depthful is a real word, but if not, I have just coined it. Please pay all royalties to me, chocolate is the preferred currency.

OK, so what am I doing in this previously mentioned food store…? Well, we’ve been having a few problems on the job.

Over the last few months we’ve been emptying out ballast tanks, (the water tanks down at the bottom of the ship which keep her stable) one at a time, and then sending a deck team in there to do routine maintenance (routine, as in, once every 4 years or so per tank).

Anyway. We just got to the last tank in the series, and so needed to fill it up with water. For some reason though, every time we tried to use the pipe to send water to the tank, the pump would get very hot and trip the electrics. We could see a very high pressure build up in the pipe by the pump, so it looked as if there was some kind of blockage in the pipe, which was not allowing water through it. We went into the tank last week or so, and looked around for any obvious problems, feeling inside the pipes as far as fingers would go to make sure they had not got cemeted over in the maintenance. No problems found though…

So we asked the engine room guys to have a look at it, and they sent a very professional welder/plumber. He took a “snake” (high pressure hose with a thing on the end which bounces around and smashes to bits any kind of blockage or rust.
Anyway… it got stuck in the pipe. So he called me, and then he went into the tank to take the pipe off and look for his snake. BUT… forgot to check which pipe. The wrong pipe got taken off…. So he took off the other one. Not his fault, he didn’t know the tank had two pipes leading into it. We couldn’t see any problems, so he put them back.

Presumably the problem was further up the pipe, closer to the engine room.

Presumably so was his ‘snake’.

So, we opened up the other tank, brought a HUGE emergency submersible pump and attached it up to transfer between the two tanks. This pump is a very serious pump. It’s designed to be hooked up, and chucked down a staircase into a flooded hold to pump it out, kind of thing. It took 3 of us to carry down to the food store here where the tank manholes are to put the pump into. We had to use all kinds of ropes and stuff to hoist the thing down. We attached it, and set it going. It was a bit complicated, as we had to have one guy at the suction end of the pump, to make sure it was OK, one guy at the discharge end to make sure it didn’t swing around and kill someone, one guy running between to make sure the hose was OK and didn’t explode, and one guy 3 decks up with a radio to switch the electricity for the pump on and off (there are only 3 connection points on the whole ship for this creature).

So… First when we switched it on, we found a hole in the hose. We found it as it started shooting water the pressure of a fire-hose all over the place in the book-hold where the discharge tank manhole is. So we stopped the pump, pushed more of the hose into the tank so the leak was inside the tank, and tried again. This time, the pressure of the pump pushed the hose into a crack under the flange of two pipes, and then ripped the whole hose open as the pressure was too high for the squashed position. I got totally soaked by this.

So we stopped the pump, got a new hose, and tried again. This time was OK… for about 4 minutes. But the pressure of the pump started pushing the discharge end of the hose back out of the tank! So we stopped the pump, tied the hose down, and started again. 2 hours later, nothing more had gone wrong, and 60 tons of water had been moved. That is, 30 tons an hour. 500 litres a minute, in other words. Quite fast.

So in went our bold intrepid welder/plumber guy to the now empty tank, and he took off the pipes and all, found the ‘snake’ in a “omega” shaped bend in the pipe (the chief mate says this is to allow for expansion and contraction of in the ship’s shape… if he had asked the C/M before sending his ‘snake’ in, it would have saved a lot of problems…) anyway. He got his snake out, closed up the pipes again, and declared the pipes probably useable… at least, no problems found in them. (These are probably original 1914 pipes, brass (I think) and still in amazingly good condition…)

Yesterday was spent with myself and another guy (possibly the next waterman? Who knows…) down here with a smaller more sociable submersible pump moving the last of the water across. (When they had opened up the pipes, about 20 tons of water drained back across to the other tank we had just moved it from.)

So I still have 10 or so tons of water to move across. I tried this morning using the probably OK pipe system, and the engine room pump. I did this very slowly, checking everything, slowly allowing pressure to build up, etc, so as not to overflow anything, or trip the electricity on the pump, or any of that. Strangely, although water was leaving the pump, the water level didn’t go up in the tank. I checked after lunch, and the level was exactly the same…. So I stopped the whole thing, and started checking my tank levels, sounding everything I could think of. About 40 tons of water had left the freshwater tank I was pumping from, and 0 had arrived in the ballast tanks. And it had not arrived anywhere else either.

About this time, I was expecting my name on the paging system any second, to find 40 tons of water had turned up in someone’s cabin…

Unluckily (or possibly not) It didn’t turn up anywhere else, either.

Anyway. We sail tomorrow, and this tank must be full when we leave. So I decided to ignore the whole missing water problem, and spent the last part of this afternoon moving water from the engine room into the empty small tank, (these pipes still work…) and then am myself down here in the dry food store, miles and miles down in the depthful belly of the ship moving the water from the small tank into the big one with the sociable submersible pump. It’s very slow.

And quite scary too. Last time the other waterman did something like this, he managed to flood the book-hold, and it caused some huge amount of damage, something in the thousands of euros range. So that’s why this entry is so disjointed, I keep running off to check everything. Yesterday I started at 6.30am, and finished at 10pm, and today I started at the more reasonable hour of 9.30am, and hope to be finished before the same numbers reappear with another suffix (or the same. That would be worse…). We shall see.

The reason it is so much work for just me, is that the other senior waterman is leaving, and changing jobs (I may have mentioned this before). And is doing training all this week. It’s all really tiring, anyway. 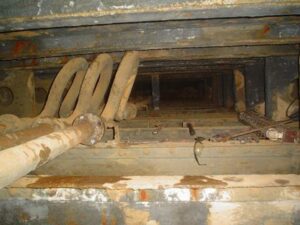 This is a photo of the inside of one of the tanks, including the “omega” bends. The tank is 1 metre 33 cm high.