Greetings, Gentle reader, and welcome to the latest episode of [email protected]

Before we get much further, here is a photo of yours truly: 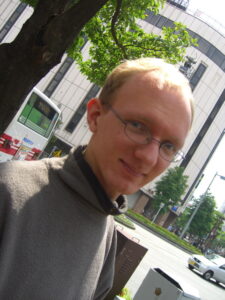 Taken in Fukuoka, Japan. Nice place. Very clean, efficient, tidy, quiet. Kind of reminded me of some of the more sane and modern parts of London (not that there are too many parts which combine both of those adjectives).

We’re now actually in Kanazawa, which is further north.

I’ve been quite busy this port, as the second waterman has been on a team staying and working off the ship for the whole port. I was also learning a lot about the audio-visual stuff on board the ship, how to use Final Cut Pro, sound balancing, and so on. Fun stuff. We had some of the people from our company’s technical/production side out for a week or so, and doing some training for us.

Since then I’ve been working on the ship’s edit suite making a couple of video projects (a Taiwan report video, and a video about the work the ship did in Philippines to show in Korea).. Final Cut Pro is very very nice software.

Especially once you get rid of the silly one button mac mouse, and put a proper 2 button+scrollwheel on the beast.

I’ve also been working quite a lot on just refilling up the ship with water. We had to pretty much replace all our water with Japanese water, due to strange regulations here, and that was all a bit complex.

I stayed up quite late one night running around the ship with the I.T. guys, when they re-built the network system, rebooting and reconnecting the DHCP client sessions on every computer… We now have internet web access on every ship-computer (not personal laptops). That is really cool.

I am probably going to be changing jobs fairly soon, I don’t know where yet. Possibly into I.T and Videographer, or something like that. Maybe working with the Audio-Visual team running the sound and stuff programmes on board. I’ve been working as a waterman for almost a year now. On Doulos that’s a long time. I just looked in our logbook the other day, which I started us keeping. The first entries are from August last year. Amazing.

I applied for the job of Technical Administrator. It would be quite interesting, and a big challenge too. A more technical ship work, and I could learn a lot of administration skills that would be useful in whatever job I end up doing in the future.

Doing all the video and all that these last two weeks, and hanging around with the IT guys a bit, I know that that is where I enjoy working most. I love doing video editing, and IT configuring and installing and all that work is so much more satisfying than water stuff. I miss programming a lot.

But whatever job I end up doing here, it’ll be useful, and also a good change. I’m really tired of the waterman’s job. It’s a great job, you can learn sooo much. And it’s very interesting, very much responsibility, very much independence. More independence than any other job on the ship, probably. Still. It’s time for a change. I’m tired of the midnight phone calls, of thinking about the ship’s water and list and draft 24/7. Of being “on call” whenever I’m on the ship. Of working alone, truely alone. Even working with the other waterman, I still miss being part of a team. I don’t much enjoy being a leader. I prefer to be a team player. Able to relax with others who know as much or more than I do, and able to pass the ball around, rather than just holding it myself, or watch my partner/assistant run with it the whole time.