Link to Part 1 (Read it First)

I played a bit with trying to make Venn diagrams in 3d. Using different shaped spheres, and so on. It’s quite hard to make diagrams which actually help to make the subject clearer. Usually it actually becomes less comprehensible.

But here’s the best I could come up with, showing 3 ‘winds’ I believe are currently blowing through the Evangelical world: 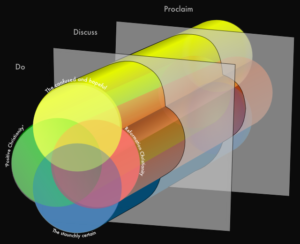 Obviously, there’s a heck of a lot more going on – just as in my previous post there are an awful awful lot of groups who don’t fit into those gross generalisations. But I’m just focusing on a few areas – humour me. You can extrapolate the concepts out to whichever field of theological hooha you like.

Proclamation: A lot of people, especially amongst the Reformed Christians, but also amongst the Positive Christians are very ‘preachy’ – in that their primary effort seems to be going in to telling the rest of the world their position. All the traditional study aids go into this: exegesis, hermeneutics, preaching, everything goes into ‘Tell the world the truth!’. And it’s not just the Reformed groups, but all across the spectrum. There isn’t a lot of open-minded-ness, because there IS an absolute truth, and our job is to tell everyone about it! One of the major shortfalls is that the people most influenced by this wind tend (I observe) to not be willing to challenge their own beliefs, but once they’ve “got it sorted” and have answers they’re happy with, are happy to debate for the sake of convincing others, but aren’t open to changing themselves. I met some Mormons a few months ago who told me, ‘We’d like to tell you about what we believe, but if you want to just discuss and try to tell us about your beliefs, then we’ll just go elsewhere. We’re not going to be converted.’

Discussion: Especially in the so called ‘Emerging Church’, much effort seems to go into ‘The Conversation’. In many ways, I suspect this is a reaction against the proclamation group – who were very much de regueur during the ’80s, and are perceived to have built into almost a fortress of dogma. The Discussion seems to be reacting away from that, saying, ‘Maybe Wayne Grudem didn’t have everything right. Maybe the world is a bit more complex than a quick Systematic Theology can describe. It’s certainly open for discussion. I don’t know, but it’s interesting – what do you think?’ And in a sense, that’s the big difference. What do you think? vs. This is the truth! And it’s not just one group saying this – I think it’s across the whole Church. Some people are becoming more open to uncertainty and relational discussion – which is positive, I think. And also, everything being open for discussion is also positive. It helps us to not become blinded.

It is a harder line to walk with integrity, though, I think, as if everything is open for discussion, how do you really know what you believe? And do you really believe it? It can also turn very easily into ‘There is no absolute truth? Right? ‘Cos, everyone has their own perspective, innit? Whaddya say?’

Doing: Many people have become disillusioned with much of this ‘speaking not acting’, and have just said “Stuff it, we’re going to go and DO what Jesus said, never mind if we get it a bit wrong. He said He’d be with us, I’m sure He’ll help us get it right along the way.” Inspired by Mother Teresa, Saint Francis, etc. The so called “New Monastic Movement” may well lean this way. I lean this way myself, I think. It’s partly why I chose to join Doulos, rather than go to a classroom based theology study. I wanted to DO, and not be spoon fed theory any more. The strength of this group is that it can become very much more loving and a real force for good, and earn the respect of non-Christians, and be a very visible light and salt in the world. Sitting in a parish centre talking about obscure theology over bad instant coffee – or hollering hellfire-n’-brimstone from a pulpit on the whole just get us ignored. The weakness is a tendency to become very “social gospel”. ‘Jesus told us to feed the hungry, care for the poor, etc, and it doesn’t matter what we believe! If you’re a Buddhist, but you’re doing what Jesus said, then hey! That’s pretty good too…’

OK. So all of this is still very basic, very simple stuff. It is building there, And I will get back to my first post’s beginning, very soon. This is definitely the sceneic route to where I think I’m actually going with this blog topic thing…

One thought on “Theology and Perspective (Part 2 of?)”