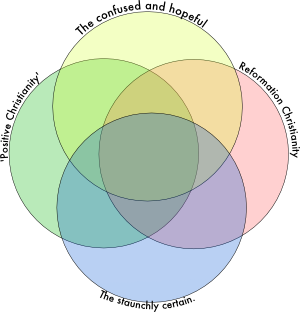 We frequently get told the typical ‘Love isn’t a feeling – it’s a decision’ aphorism beloved of the Joshua Harris school of thought.

And, of course, there’s a lot of truth in that.

Going by the Self Help philosophy, virtually everything is a decision. You can decide to be happy, sad, excited, motivated, depressed, whatever – and Make It True In Your Life™.

And of course, we do have an element of choice in how we react to situations; our responces are not all pre-determined by DNA, our upbringing, nor instinct. Choosing to live purposefully (not in the Purpose Driven Life sense) – saying ‘I’m going to sail to this specific place, whether or not it’s easy, whether or not the wind is against me, whether or nor it’s raining.’ is more likely, I feel, to lead to something meaningful than simply being tossed around by whatever weather (whether favourable or not).

Ha! I managed it. Weather followed by whether in a sentence. Betcha didn’t see that one comin’. All this blogging stuff is helping my spelling to impruve.

Now the Perciever (MBTI) in me says ‘hang on a second, mate – you’ve got the whole thing backwards. It’s not about the destination, it’s about the journey. So actually, taking what weather comes at you along the way – being flexible; able to adapt to the situation; enjoying the mood – is more important than whether you’re actually got some place to finally end up. And when you end up there, you’re really just en route to somewhere else! There are no desinations, only stepping stones.’

So here’s now an interesting concept. Totally un-scientific, un-tested, un-official and un-ilateral (OK, OK, superfluous punctuation for the sake of continuing the sequence humour. Sorry). The Church, in general, especially the Reformed branches of it, are dominated by J types. The theologians, especially, of the NTJs. This leads very easily to Us/Them; Saved/Unsaved; Elect/Damned; Christian/Heathen; Religious/Secular distinctions. At some level, this is fine. When it’s implimented by well integrated balanced and loving Js, it can become an inspiration to many, and allow huge, complex theological issues to be understood slightly better by us plebs. The trouble comes when we don’t realise that it is an abstraction, and that every piece of theology that we come up with – no matter how brilliant or water-tight it seems – is merely the wrestling of a fallen finite mind with concepts of an infinite perfect God.

Those of us who are not NTJs, when we pick up on NTJ thought patterns, and try to live that style, often pick it up very badly, and express the worst elements of it. I feel that myself, when I try to think or live as a Calvinist, become the worst form of Calvinist. I don’t have the capacity inside to take those black and white and apply them without either falling into Lord of the Flies over-bearing judgementalism and pettiness, or else wishy-washing it out into something which would have me burned at the stake for relativism – should the Reformation Inquisition ever catch me.

My natural tendancy, I feel, would be to go to almost the other extreme, and say ‘Look at Jesus’ life. How He seemed to get distracted along the way by the people He met. He didn’t go charging around from destination to destination, but wandered around meeting, healing, teaching, loving. We’re not called to judge people as saved or unsaved – we’re called to love them, and point them to Jesus.’

There’s quite a lot of books being published basically saying that. Theres whole streams of Christianity going into this philosophy quite deeply. And it annoys the hell out of the Reformed dudes. I saw a video clip of that scarily smiling Joel Osteen bloke saying “You know, I ain’t called to tell people they’re, you know, like, going to hell. I’m just called to encourage them to go to God. Tell them about His love, y’all.”. This was being mocked by the Reformed crowd, who were saying ‘unless you tell people that they’re going to hell, and the only way to salvation is through Jesus Christ, then you’re leading them astray, Osteen, you’re a false prophet!’

Now Joel Osteen is on one waaaay out limb of the Feel-Good Self-Help neo-Prosperity Post-Schuller “positive Christianity” thing, while WotM and others who mock him are waaaay along the other wing. Most of us, I suspect, are not exactly “somewhere inbetween”, but more like a third group, wandering after Jesus, trying to love Him, love others, figure out exactly what we believe, and trying not to get hit by collateral from the missiles being thrown around in the wings. 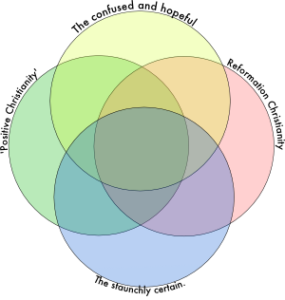 Although I think the following may actually be better: 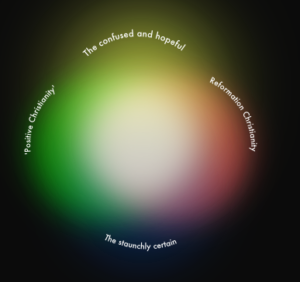 Where do you fit into the spectrum?

4 thoughts on “Theology and Perspective (Part 1)”