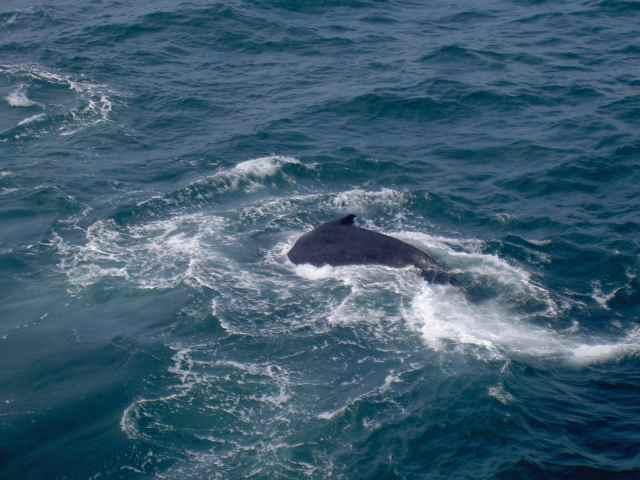 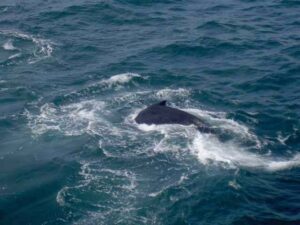 Here is a picture of that wee whaley thing we saw from up on the bridge, way back. Cute, inni?

A few people have suggested that I start formatting my blog and filling it out a bit, and turn it into a book, and try and get it published. So I went through and copied all the text into a AbiWord document, went through it all with the spell-checker (which I had to look at sternly and tell not to use American spellings…) and then did a word-count… 26839 words! Wow… I would never have expected that! Subtract a few hundred for headers and dates and all, and well. Yeah. That’s pretty good for a start. I’ll start tinkering with it soon, and adding anecdotes and all. Just random perhaps interesting stories. Like this one:

While I was on watch, the second time, more people would come and just chat to me, which was nice. It helped the time pass faster. Anyway, one of the guys who came up and chatted was a Project Worker (short termer, not a STEPPER, just came for a specific job or time or whatever), from Finland. We were talking about this one guy some of the ship’s company had met, who said he was British, on holiday on Durban, but had had his passport stolen, and now the British Embassy would not let him get a new one, as they had no proof that he was who he said he was. Not a fun situation. Anyway. Apparently, for Finnish people it is a lot easier, you can just walk into any Finnish Embassy, and get a new one just like that! I asked how this was possible, and he told me in his deep nasal voice “You just speak to them in Finnish. Anyone who speaks well Finnish must be from Finland. Nobody else can.” Ah. That explains it. Apparently also the government has some kind of way of validating it, perhaps with fingerprints or DNA or something as well… I could probably use this as a good excuse to rant on for a few pages about the horrors of Big Brother Is Watching You And Reading Your DNA. or something like that. But I wont. I mean, most people already have pretty strong opinions about it, one way or the other, and whatever I say will have no effect on them. Or on their opinions. I used to have so many random discussions and arguments with one of my cabinmates, who left earlier than the rest. The American Seminary-student. Man, that was fun. “What is the difference between ignorance and innocence? And which is the more blissful?” “How to respond to leadership, and disagreement-with leadership?” and so on, as well as all the usual ones , Speaking in Toungues, Church leadership structure, responce to disagreement with leadership, basis of faith, various cultural things, and so on. Lovely. We disagreed on so much! And at the same time had a similar view on many things. Yeah.