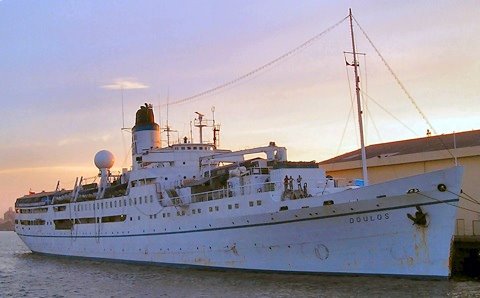 I’m finished watch, but feeling kinda sick/queasy, possibly bad fruit. I did eat four apples just before watch in one go; the fruit had probably been sitting in the backstage of the theatre getting hot and stuff all day. Not serious. 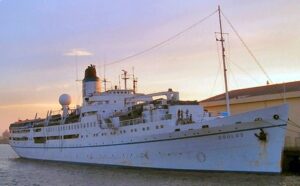 Visak port is even dirtier than the last one but it’s rained twice! Lovely. Huge massive torrents of it, with thunderstorms like in Colorado. Lightning hit one of the port floodlight towers, and so the port lost lighting for about 6 hours.

Then we got a page from the book exhibition, “Attention ship’s company, we are in need of volunteers to come to the book-ex deck to help save the books.”

So of course loads of us charged up there. Water was coming in all the sides, as it wasn’t prepared for 45 degree torrents. All the cash desks got soaked too. So I was running around tying canvases down all over stuff. Because it was a sort of i-night last night, most of the ship’s company were off-ship, so only about 40 people were on board. A lot of books got a bit wet, but not wrecked.

I spoke to the bosun about the lifeboatman job. He says he wants whoever does it to start working as soon as possible so they learn the job really well before September, when the current guy leaves. When I spoke to one of the firemen, he said that with the lifeboatman and fireman jobs, you can basically work what hours you want to, as long as you get jobs done. So it would be very cool.

Lifeboatman does maintenance of all lifeboats, emergency equipment and so on, also repair of all canvases on board, and nets, ladders etc. They can get as many deckies as they need when they want them. But if just checking rations and water supplies, no others are needed. If I did this, I’d be able to do more dramas and programmes easily, and sleep more at night! Also because I’d be working on my own frequently, I’d be happier socialising during off-time.

It sounds ideal, but then again, the grass is always greener and all that. Heading for almost 4 months on the ship, almost the whole of my preship is a bit fed up with their jobs and want to move/change etc, which is expected. In about 2 months’ time, most will probably be happy again.

I don’t know if I will do it; they must have this week’s team leaders meeting first and see what happens. They will probably decide then, but who knows? Some things happen on board so fast and other things take forever! I still haven’t been told definitely that I’m in the drama team…