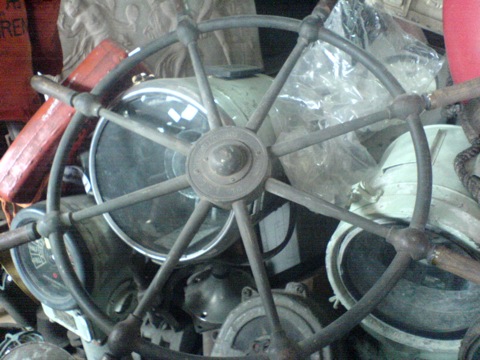 We slightly overloaded the ship with water last week, because of the sheer relief of a quayside connection again. The ship was totally low in fuel, so we loaded her to the max of water, with little effect on the trim. Ok, huge effect on the trim, on the draft, little effect. All the water tanks are at the back, so we ended up with a 2.5 meter trim then they bunkered fuel 4 days ago, and we haven’t loaded since.

When they loaded the fuel, the ship was below her loadline. Its quite colder weather, so all the doors are acting a bit odd. The c/m told me that he knew we must be light on water, since his door was not shutting as normal. I told him we had enough, but he said “load her up! The ship must be almost flat right now!” So I loaded her up. It was quite fun. My bathroom was almost diagonal, and the toilet outside the engine room was tilted both ways, and very weird to use.

Anyway. we will load another 50 tons or so the day we sail. (Tuesday)

So today, we started work after lunch (its Sunday) and then did basic soundings, made a few keys and I went up to the mates office. I found a really really dirty tarnished old brass ship’s wheel (with wood outer spokes) in the office. The deck secretary told me that the 2nd officer had found it in an antique store, and that it was going to be attached to the bridge of Doulos. 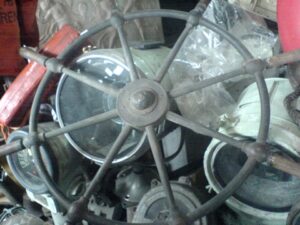 There were Brasso tubs around the floor, and so i asked “surely you weren’t trying to Brasso this?”

And she said no, but some others were trying to no avail. They had also tried toothpaste, and were going to try paint remover. I laughed, and said how silly. I then stole the wheel,

I phoned the store keeper, and he came to the keyshop. I borrowed some de-liming liquid from accomotation, and some wire wool and leather gloves. In half an hour of our work, it was shiny and brassy, so then then we Brasso’d it for another half hour or so, called the mates, and told them to come, and bring some Coke with them. On the way they told me on the phone that Coke has had it’s recepe changed, and probably wouldnt work. I just told him to bring it. They turned up, saw the wheel and were VERY impressed. 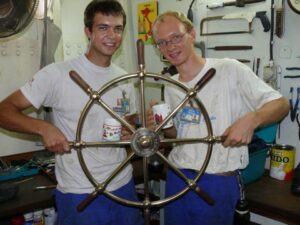 I did my PR thing: I told them all, “if you need to know anything, or if you need something difficult done, just ask the Watermen how! they know everything!

They kept chuckling and saying well done boys, and how happy the captain will be and we will (hopefully) get a *real* wheel on Doulos again!

The Coke actually tasted quite nice….