So I thought it might be interesting to post about some things which are adding to my life here.

First post is coffee. I’m quite the coffee fan, over here. Compared so some people, not so much, but for Carlisle, quite high up the coffee freak ladder.

Unless there is a hidden coffee community I’m not finding somehow.

I don’t have a massive budget for going to flashy cafes or expensive bistros or whatever all the time, so what I’m more interested in is good tasting home coffee. 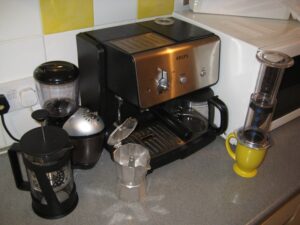 First a fun story, and then I’ll go into more detail about everything else, so if you’re not interested in coffee, then you can skip the end. 🙂

So when I moved into this house with Euan, there was a french press / cafetiere in the cupboard, so I thought “Oh good – I don’t need to buy anything for making coffee, I can use that”. So the first morning I boiled the kettle, let it cool for a while I put some ground coffee in the cafetiere, and then poured the water in.

I thought it was a pyrex pot, but alas, I was wrong. There was a tremendous ‘crack!’ sound, and coffee started to leak from the bottom. Oh no! What to do, lah?

So since it was only leaking very very slowly, I thought, well, I won’t waste the coffee, I’ll let it brew, plunge it very carefully, then pour the coffee out – if any glass did shatter, the plunger/filter will clean it out, and then I can see how bad the damage is.

So duely I followed the above plan, until the pouring bit. I lifted up the pot, only to find that in fact the crack had been ALL the way around the base! So when I lifted it up, the base stayed on the work surface, and the rest of the pot came up in my hand.

The coffee, alas, followed the laws of physics (I know, I can hardly blaim it…) and went everywhere.

No coffee for me that morning.

So I bought a new french press to replace the one I’d exploded, but by that time, I’d already found
…
A Krups espresso/filter machine.
…
in Charlie? (the used clothes / stuff team cupboard, when you leave, you can leave anything you don’t want to take with you for others to have).

So I was quite surprised to find this in Charlie – until I looked it up online.

It has terrible reviews.

Here’s my take – it’s kinda fun to play with, but I’m not convinced by the ‘crema’ that the espresso part produces. It feels kinda fake to me, almost like the machine is somehow ‘frothing’ it to make it seem more real or something. The coffee doesn’t taste too horrible, just … meh. Not really rich and interesting. Maybe un-set up temperature and pressure stuff? I dunno. I’m no expert on any of this! The milk steaming wand is very cheap and plasticy, as well as seeming near impossible to actually steam milk in proper microfoam also seems to taint the milk with a kind of rubbery aftertaste. Maybe it’s just me though…

The coffee grinder I bought in singapore a few years ago, and it’s been getting lots of use over the last 2 and a half years or so. A very worth while investment – grinding the coffee beans freshly makes the biggest difference to taste of anything that I’ve found.

The Moka pot is also lots of fun – it’s quite a lot more work than the areopress to make coffee and clean again afterwards, but also makes very good coffee, with quite a different flavour to –

the weird syringe thingy on the right of the picture.

It’s called an Areopress – it’s a relatively new way of making coffee, very ‘low tech’ in some ways. It makes coffee in a kind of hybrid way between french press / cafetiere and a filter machine (with hints of espresso method dashed in for extra flavour). You mix the ground coffee with hot water, and let it get totally imersed, like a french press, and then use the synringe bit to push the drinkable coffee through a paper filter. It’s incredibly easy to clean, makes very nice coffee very simply and quickly.

I’m totally a fan of the areopress now. It’s so portable and rugged too, I’ll easily be able to take it to conferences and other events.

So that’s my first coffee post this week. We’ll see if I can remember to post further…